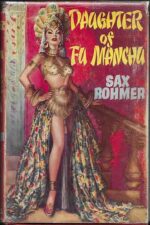 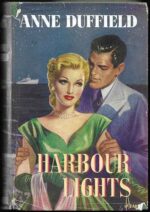 *Crime, Spies & Sleaze: I’ve banged on here before about the quality of work by Reginald Heade, dubbed ‘England’s Greatest Artist’ for his book covers in the 1940s and 1950s, so of course we’re pleased to have two new examples fresh into stock this week, and great examples at that. The first is Harbour Lights by Anne Duffield, a first hardcover edition from 1953 and a fine specimen of Heade’s romance cover work. (Yes, we know romance isn’t exactly crime, spies or sleaze, but whilst we don’t plan on having a romance category, we’re not letting that stop us stocking anything by Heade!). A VG/FN book in a GD/VG dust jacket, with minor creasing at the bottom spine and a slight loss at the top spine and back cover, but the art is totally undamaged. The second selection is more appropriate for this category, and a classic thriller to boot – part of Sax Rohmer’s Fu Manchu sequence, one of the great villains of English literature. This is Daughter Of Fu Manchu, a second UK HC VG/FN from 1955 in a GD/VG dust jacket, sporting a stunning Heade interpretation of the title character. The dust jacket has a small loss to the top of the spine and a couple of tears on the rear, but the front cover image is totally unspoilt. Two very disparate looks at the art of Reginald Heade, both from the same publisher, Cassell.
PICTURED:
HARBOUR LIGHTS by Anne Duffield VG/FN in GD/VG DJ 1953 £15
DAUGHTER OF FU MANCHU by Sax Rohmer VG/FN in GD/VG DJ 1955 £40 SOLD