↓
Home→What's New→British Update: A Plethora of Princesses! Princess Picture Library renewed, from #5 to #119 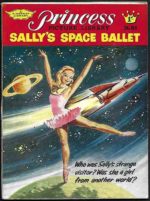 *Girls’ Picture Libraries: Launched in 1961 and lasting until 1966’s #120, Princess Picture Library started out by alternating between two fixed ‘players’ – Sue Day of the ‘Happy Days’, and Sally Doyle, one of those ballerinas who was always performing her pirouettes in unlikely locales – jungle, castle, Tesco’s, you name it. In later issues, however, the scope broadened to encompass other features, such as the Freedom Fighters for France (it’s a wonder the German Army got anything done in World War II, with all these plucky schoolgirls hurtling at them) and well-meaning plus-size duffer Bessie Bunter – sorry, Tilly Tuffin. Our potpourri of Princesses is delicately refreshed this week with almost 60 issues previously unrepresented in our inventory, commencing with #5: ‘Sue and the Cake Mystery’ and ending with #119: ‘Sue and the Circus Mystery’. My, that girl gets everywhere. Along the way, many issues didn’t even involve either Sue or a mystery, but you’ll have to trust us on that. Averaging VG, with several Fine, these are structurally sound copies with generally bright covers, but brought slightly down by rusty staples.
PICTURED: PRINCESS PICTURE LIBRARY
#21 VG £9
#81 FN £9