*Girls’ Picture Libraries: We’re very pleased to have acquired possibly the best collection of vintage Boys’ & Girls’ Picture Libraries that we’ve ever seen, close on a thousand items, characterised both by high grade and rarity. We’ll be sharing these with you in the months to come as fast as we can process them in our new feature we’ve called CSD: Putney, since the vast majority of these fall into the category of either Cowboy, Schoolgirls or Detectives.
We’re commencing this week with part of the Schoolgirls element to this collection. From Autumn 1963, Micron, a small publisher of picture libraries and story magazines, put out Schoolgirls’ Adventure Library, the content, format, title and even logo of which were strikingly familiar to readers of Fleetway’s popular series, Schoolgirls’ Picture Library. We are, of course, sure this resemblance was entirely coincidental and in no way intended to mislead hasty consumers. Ahem. We don’t know when S.A.L. (as it was abbreviated to in its own advertising) finished, as we’ve only ever seen a handful previously in our almost quarter-century of trading – but now, we know it ran to at least 61 issues, thanks to our recent acquisition! This selection commences with the very first issue, and ends with #61, in between supplying 25+ unique issues to our inventory, and a scattering of duplicated numbers. With titles like “Joyce and the Golden Medallion”, “Adventure In Amsterdam”, “Cave of Secrets”, “Tom and the Big Top” (what’s he doing there?), and “Elissa and the Shaft of Silence”, the familiar themes of sports, school comradeship, mystery and travel in exotic foreign climes are well represented. This selection is characterised by phenomenally high grades for the vintage, with many VF/NM and even a couple that are legitimately NM – even issues with the back cover missing, but the story intact (of which there are just a few) achieve a Fair grade, because of their remarkable preservation in every other aspect. Don’t expect too much of the ‘Magazine Supplement’ trailed across several covers, though – it’s a bodged-up four pages of the usual cooking, pets, and fashion tips. The appeal here is of the rarity and high grade of these seldom-seen items. Picture Libraries from 1963 never turn up in as nice condition as these! Pictured below: #1 VF/NM £75, #3 VF/NM £30, #24 VF/NM £25
Look out for much more from CSD: Putney in the coming weeks! 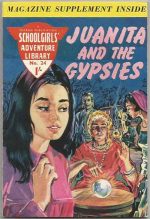