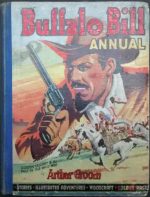 *Annuals: Distributed through the Woolworth’s chain stores, the Buffalo Bill series was publisher T. V. Boardman’s most successful annual series. Commencing with the 1950 Annual (released late Autumn 1949), the series began with children from the then-present time-travelling to meet the legendary hero and participate in his adventures – a light-fantasy concept that was subsequently forgotten about in favour of just Western adventures. But writer/artist of the Buffalo Bill strips, Denis McLoughlin, was a knowledgeable man about the Old West, and rather than being simple shoot-’em-ups, his stories were engaging and historically accurate, with additional well-researched text pieces from Arthur Groom, Rex James and McLoughlin’s brother Colin backing up the adventure strips. But the series is best remembered for McLoughlin’s lavish artwork, in strips, text illustrations, and colour inserts. We have nine of the thirteen Buffalo Bill Annuals back in stock, after a very long absence from our shelves, ranging from the first, 1950 (two copies) to 1961’s #12. Condition varies, and some have minor flaws, but all are complete (though without dustjackets in most cases).
PICTURED: BUFFALO BILL ANNUAL #1 (1950) GD/VG £22.50