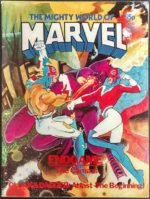 *Marvel UK: Following the cancellation of the Daredevils with issue #11, Alan Moore and Alan Davis’ acclaimed reinvention of Captain Britain moved into the second (monthly) series of Mighty World of Marvel from #7, accompanying, among others, reprints of Claremont and Miller’s Wolverine and Cloak & Dagger, plus new text stories of the vigilante Night Raven. Although this series, with the introduction of Meggan and the final clash with the Fury, is regarded as Moore’s finest work on the strip, it was also his last, as he left following a dispute with Marvel about unpaid invoices, and from #14 the strip fell into different writers’ hands, including Steve Craddock, Mike Collins and artist Alan Davis, before the strip’s moving into Captain Britain Monthly after #16. We have a complete run of the Captain Britain issues of Mighty World of Marvel monthly (#7 to #16) back in stock.
PICTURED: MIGHTY WORLD OF MARVEL #12 FN/VF £6