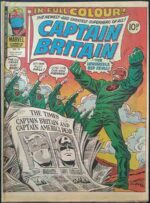 *Marvel UK: Marvel UK’s unprecedented and experimental attempt to broaden their readership by generating a new British hero, Captain Britain, was the subject of much controversy, not least because he was created by two Americans (Chris Claremont and Herb Trimpe) who, from the evidence presented here, had never met an English person, and whose interpretation of the UK’s manners and mores made the Austin Powers films look like documentaries. Be that as it may, the character endured to become a respected icon of the medium, and these issues are now attracting keen collector attention. Many issues of the first series new in this week, between #3 and #31, inc #19 (1st Lance Hunter, aka ‘Mr. Mockingbird’ from Marvels ‘Agents of S.H.I.E.L.D.’ television series) plus the 1980 Summer Special.
PICTURED: CAPTAIN BRITAIN
#19 VG/FN £10
1980 SUMMER SPECIAL VG £10 SOLD