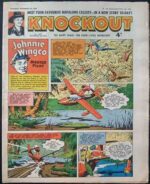 *Humour Comics: Although starting out in 1939 as mostly a Humour title and rival to Dandy & Beano (which is why we list it in our Humour category), after the second World War more and more adventure strips started appearing, so that by the time of the issues featured in this update (1955-1958), it was really what we would term a Boys’ Adventure & War title. Many stories featured known media characters such as Davy Crockett, Hopalong Cassidy and Sexton Blake, and there were quality originals as well, such as master pilot Johnny Wingco, science fiction thrills with Space Family Rollinson, Thunderbolt Jaxon, Firebrand the Red Knight and more. Of course, some humour strips remained, most famously Billy Bunter, but by 1956 the adventure stories had taken over the cover and set the tone for the remainder of the series. In this update, a handful from 1955, two from 1956, one from 1957 and lots from 1958.
PICTURED: KNOCKOUT #1027 (1958) FN £6