↓
Home→What's New→British Update: Krazy For You! 1976 Weekly Restocked from #1 on 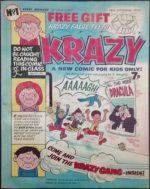 *Humour Comics: Krazy launched in 1976, lasting 79 issues of comedy which largely revolved around the audaciousness of its frontman Cheeky (later to get his own ongoing weekly) and other members of his ‘Krazy Gang’, and parodies of TV shows such as ‘Birdman and Chicken’ and the ’12 1/2p Buytonic Boy’. In an attempt to move in a fast-paced, ‘sketch-show’ direction, it printed jokes and illustrations tucked between the panels, and in between the regular strips were a host of one-off spoofs and fake ‘guides’. The back covers were given a twist too, being ‘disguised’ in some way, like the cover of a fake Maths book, ostensibly so any watching authority figure could be fooled that the reader was doing something more productive. We have twelve new issues of Krazy in stock, all from the first year of publication, commencing with the very first.
PICTURED: KRAZY #1 VG £15