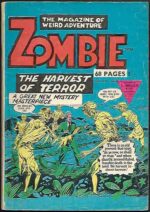 *Vintage UK/Australian Reprints of US Material: Len Miller was the premier UK publisher of ‘faux’ American-sized British comics in the 1950s and early 1960s. He published a wide range of material, both original and US reprint, perhaps most famously Marvelman and Young Marvelman. Although succeeded by Alan Class, there was a period in the early 1960s where both publishers overlapped and some of Miller’s titles (Mystic, Spellbound, Voodoo and Zombie) closely resembled the type of content also being used by Alan Class, reprinting Atlas, pre-hero Marvel and other early horror, with occasional forays into the Marvel Super-Hero Universe. Such things are to be found in the pages of Zombie, three issues of which are featured in this update, including #9, which reprints the 3rd Dr Strange story from Strange Tales #114.
PICTURED: ZOMBIE #9 VG £25