*Alan Class Reprints: Five more plate sets from the Alan Class Private Collection, each one reprinting a story from the Silver Age of Marvel’s super-heroes – in most cases, as previously remarked, the first reprinting of these classic tales, very shortly after their first release! All five sets feature, in addition to publisher Alan Class’s file copies of the comics, a number of lead printing plate sets originally used in production, plus a hand-signed Certificate of authenticity from Alan Class himself, with the odd extra too! All sets are supplied in a plastic presentation/display case. 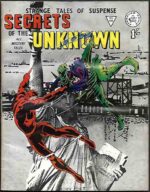