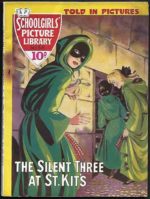 *Girls’ Picture Libraries: The hugely popular Schoolgirls’ Picture Library series is refreshed this week with 56 new issues, none of which were previously listed with us. These done-in-one digest-sized stories, many one-offs but a large number featuring recurring characters such as Zanna of the Jungle, the Peewits, the Rolling Stones, (not those ones) Miss Adventure and the Silent Three! This selection is generally in nice shape, averaging VG – would be an easy Fine, but for rusty staples – but with several legitimate Fine among their number.
PICTURED: SCHOOLGIRLS’ PICTURE LIBRARY #58 GD £15