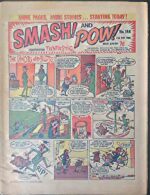 *Power Comics: By the time we got to 1968, Smash absorbed Pow (which had previously absorbed Wham) and in that year it also took in the remaining survivor Fantastic. Thus Smash was the last of the line. We have almost all the issues from the Pow merger (#137) until the end of the Odham’s run (#162), including the Fantastic merger issue, the Fireworks issue for 1968 and the final issue itself. Featuring a heady mix of both Marvel & DC reprints alongside homegrown adventure and humour strips, Smash was a fascinating experience in the growth of the UK comics industry in the 1960s. The title actually survived Odhams, being published by IPC for another few years, but as a more conventional UK Boys’ comic without the American material. Full details as always in our catalogue.
PICTURED: SMASH #144 VG £6.75 1st Smash, Pow & Fantastic