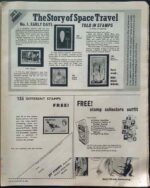 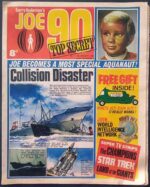 *TV & Film Related Comics: From 1969, the much-publicised Joe 90 Weekly, released to tie-in with the latest Gerry Anderson ‘Supermarionation’ TV series, in which bespectacled nine-year-old Joe McClaine acquired phenomenal skills by having computerised knowledge downloaded into his brain, and set out as the unlikeliest secret agent of all, for the World Intelligence Network (W.I.N.) Sadly, for all its pre-publicity, Joe 90 turned out to be a rare Anderson flop – apparently young viewers related to adult heroes, not kids their own age – and the show foundered after 30 episodes, with the comic’s run lasting only a few weeks longer before being incorporated into TV 21 Mk. II! Now, however, the short achievable run of Joe 90 is much sought-after, having the usual quality artwork of the Anderson adaptations, and co-featuring comic strip versions of such popular TV shows as Star Trek, the Champions and Land of the Giants. Just a small update here, but including #1, #3 & #27. #1 is a nice VG, but has a coupon out affecting the ‘Ninepence & Tenpence of Sport’ story.
PICTURED: JOE 90 #1 App VG (and page with coupon missing)