↓
Home→What's New→British Update: Stand By For Action! TV Century 21 #1 x2 (1 with Free Gift) plus full set of all 6 Specials plus Thunderbirds Are Go bonus

We’ve been blessed, the last year or so, with some truly extraordinary acquisitions, and this entry is no exception, featuring not one, but several of the Holy Grails of UK comics collecting. Not only do we have the first ever issue of the acclaimed TV Century 21, in a choice of conditions, one with the original free gift – but we also have seven of the six TV Century 21 Specials! How did we manage that? Read on…

Launched in 1965 (but cover-dated 100 years ahead), TV Century 21 combined the huge appeal of Gerry Anderson’s hit sci-fi TV shows (Stingray, Fireball XL5) with the finest comics artists in the UK at the time, such as Ron Embleton and Eric Eden, and a high standard of production values unseen since the launch of the Eagle. Jettisoning the readers into a future of imagination and high adventure, TV Century 21 is one of the most fondly-remembered British comics. We have two copies of issue #1: a VG, with only minimal spine and corner wear, with the original free gift – Secret Agent Identicode – written in by the previous owner, but otherwise GD. Fireball XL5 by Graham Coton, Stingray by Ron Embleton, Lady Penelope by Eric Eden (a full year before Penny’s debut in the Thunderbirds TV show!), The Daleks by Terry Nation and Richard Jennings all begin. This copy is on sale at £400. Our second copy of #1 is an unabashed PR: extensive spine wear, covers almost separated, tape residue on spine, tape on back cover, extensive wear on all page edges, with a small corner missing from the back cover, impinging slightly on the Daleks strip. However, apart from that very minor encroachment on the Daleks, all pages complete and readable. Available for £50.

There were also six TV Century 21 Specials with orginal comics stories, and we’ve scored the full set. Taking them in order of appearance: 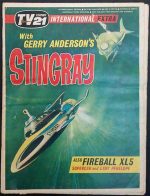 1965’s TV Century 21 Stingray Special starred the eponymous heroes of W.A.S.P., based in Marineville, illustrated by Ron Embleton, backed up by Marina, Girl of the Sea and Oink the Seal. GD (light spine wear) £80. 1965’s TV Century 21 Summer Extra featured Lady Penelope, Stingray and Fireball XL5 among others, with contributing artists Frank Hampson and Ron Embleton. This is a FA copy, considerable spine and edge wear but no interior markings – puzzle pages are often done in copies of this – on sale at £50. 1965’s TV Century 21 International Extra is another Stingray-heavy issue (Stingray was a hit on US TV at the time) but also featured Fireball XL5, Lady Penelope, Supercar and a behind-the-scenes photo feature on the making of the Stingray TV show. Contributing artists include Ron Turner. GD/VG £100. 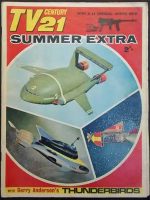 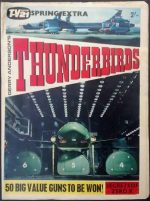 Moving on to 1966, the second Summer Extra puts the new series Thunderbirds front and centre, with Special Agent 21, Fireball XL5, Stingray, the Munsters and My Favourite Martian singing back-up. VG £100. The 1966 Thunderbirds Extra, to no-one’s surprise, also features International Rescue and their chums, with art by Ron Turner and Brian Lewis, and also featuring The Munsters, My Favourite Martian and Lady Penelope. GD/VG £80. And 1967 saw the TV Century 21 Spring Extra, also starred the Thunderbirds, with a strong emphasis on Zero X, the virtual co-star of the Thunderbirds movie (and what Anderson hoped would be a ‘Stealth pilot’ for a Zero X TV series). Artwork by Brian Lewis and Ron Turner. VG £100.

But wait, didn’t we say seven out of six TV Century 21 Specials? Why yes – because while not a comic special, 1966’s Thunderbirds Are Go!, released to tie-in with the premiere of the Thunderbirds movie, featured extensive photos, (b & w and colour), cast list, behind-the-scenes, synopsis and more of International Rescue’s venture onto the silver screen! This highly sought after piece of cinematic memorabilia is FN/VF at £70.

And this is just the tip of the iceberg, as we brace ourselves for a mammoth restock of all things TV Century 21 related in the weeks to come – F.A.B.!

SORRY, ALL NOW SOLD EXCEPT THE FREE GIFT ISSUE #1