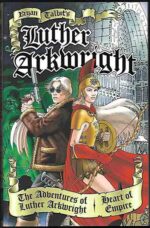 *Collected Editions: We’re really glad to see this one in print. Bryan Talbot’s tour de force of a traveller/adventurer between multiple realities, Luther Arkwright, an agent of psychic powers. Shot through with a strong flavour of British history and empire, these stories evoke a strong atmosphere of steampunk before that term was coined. Originally published in comic form as the Adventures of Luther Arkwright (black and white) and Heart Of Empire (colour), this collected edition reprints both, complete with cover galleries, loads of extras, a foreword by Michael Moorcock and an afterword by Warren Ellis. Highly recommended.
PICTURED: LUTHER ARKWRIGHT NEW/MINT £36