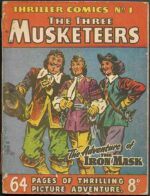 *Boys’ Adventure & War Picture Libraries: Just one item in this category this week, but a great one: Thriller Comics # 1 from 1951. This digest-sized comics series, most famous under its later title of Thriller Picture Library, ran for 450 issues until 1963, and while it featured a plethora of characters during its lengthy run, the trend for the early years was for historical swashbucklers based on fictional (but serendipitously copyright-free) characters such as Robin Hood, Rob Roy, and so on. One such was the Three Musketeers, who were chosen to lead off the series in this volume. The artists were all accomplished Fleetway professionals, and readers thrived on these beautifully-illustrated pocket adventures. This copy of #1 is FA/GD, structurally sound but with considerable spine wear, including long splits at top and bottom and the habitual rusty staples, which haven’t bled too badly; interior pages clean and flexible.
PICTURED: THRILLER COMICS #1 FA/GD £60