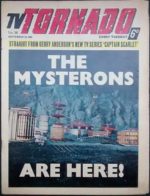 *TV & Film Related Comics: TV Tornado ran a little under two years, but made quite an impact, bringing lesser-known (in the UK) series such as the Phantom, the Green Hornet, Flash Gordon and Magnus Robot Fighter to the attention of a British readership, as well as offering new comics adaptations of the Saint, Tarzan and others – including, from issue #36, The Mysterons, villains of the Gerry Anderson ‘Captain Scarlet’ television show, in their very own series! We have more than 20 issues new to our lists this week, ranging from #8 to the final issue #88, and including #36, the premiere of the Mysterons’ strip!
PICTURED: TV TORNADO #36 FN £18 SOLD