↓
Home→What's New→Looking for Love in all the wrong places – the strange story of Fishboy, Denizen of the Deep

Buster weekly, launched in 1960, front-loaded its humour strips and appeared to be a purely ‘funny’ book, but for its first fifteen years it featured a high ratio of adventure strips behind its comedy façade. In the issue dated 20th January 1968, the longest-running and most successful adventure series to that point debuted – ‘Fishboy’.

Well, technically, it was the first issue of Buster and Giggle. In the ‘hatch, match and despatch’ practice of British weeklies (where with a ‘great news, chums!’ strapline, the readers would be informed one failing comic would be amalgamated with another to boost readership), the short-lived (and frankly a bit rubbish) Giggle had been shoehorned into Buster. But since Giggle’s line-up, mainly money saving European reprints, had so little to bring to the table, a brand new strip was launched in the first ‘amalgam’ issue.

‘Fishboy’ was  a classic example of the ‘feral child’ trope (abandoned in exotic setting, raised by non-humans) beloved of fictioneers since Mowgli and Tarzan. Fishboy had been mislaid by his travelling geologist parents in the tropical islands of New Guinea. You know how it is – you pick up a lot of interesting stuff on the trip, and something’s got to be left behind to avoid excess baggage fees!

Foraging in the ocean for food, the infant adapted to be able to swim superhumanly fast, breathe underwater, withstand undersea pressures, and communicate with all sea life because Of Course Biology Works Like That!

Wearing only the tiniest seaweed swimsuit – knitted by kindly old Ma Dolphin, for all we know  – Fishboy was inspired by a chance find of a photograph to seek his ‘beloved parents’ – who, to be fair, had assumed him lost at sea, explaining why they never bothered searching. Thus commenced eight years of a barely-clad, lithe, athletic blond teenage boy, swimming all over the globe, wandering hopefully up to total strangers, and asking them: “Are you my Daddy?” Ahem.

Fishboy was by writer Scott Goodall and artist John Stokes. Goodall was to revisit the ‘feral child’ theme at least twice more, with ‘Kid Chameleon’ in Cor!! (desert waif, raised by lizards, artist Joe Colquhoun) and ‘Kangaroo Kid’ (Australian outback, marsupials, John Stokes again), but Fishboy outlived both, partly because his super-swimming skills enabled all sorts of exotic vistas to be evoked with a mere ‘Searching for his parents, our hero swims to the coast of Wherever’, whereas his landbound brethren were confined to a small set of locations.

As the strip progressed, Goodall’s imagination placed our hero against ever more bizarre antagonists. Although Fishboy was super-human, he wasn’t specifically a super-hero – his quest was to find his parents, not to fight crime – yet he nevertheless got embroiled in  situations where people were being abused or exploited, and his highly-developed sense of justice, coupled with an almost childish naiveté, caused him to intercede. At first his opponents were oddly-named eccentrics, but eventually developed into virtual super-villains. Black-Hat O’Brien; Heinrich the Strong and Tree-Stump; The Collector; Agokk the Mask; Rum-Jungle Jones; Boomerang Bailey; Johnny Mountain; Karag the Crab; Houndstooth Hangerman; the Black Leopards – it was a collection of freaks worthy of Dick Tracy or Batman’s Gotham!

Not to suggest, though, that villainy was the sole mainspring of Fishboy’s adventures. In between battles with such antagonists, he helped all manner of folk above the seas and below, many of his stories having a distinct (and at the time definitely un-trendy) ecological subtext. 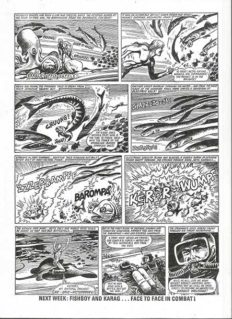 John Stoke’s artwork was the series’ greatest asset. Meticulous, polished and painstakingly researched, it  captures both the underwater and landlocked milieu with an attention to detail and atmosphere which is all the more remarkable considering that Stokes was generating this quality at the rate of two pages per week for a solid eight years, with other side gigs!

Then, there’s… well, the other matter. I mentioned the ‘vealcake jailbait’ aspect of Fishboy earlier, somewhat jokingly, but I’m not the only one to notice.  Other comics critics have pointed out that in the Fishboy series, we have a gym-fit, nearly-naked blond lad of sixteen or so who gets tied up a lot.

Over the course of the series, he was bound with ropes and chains so often that the creators utilised ever more imaginative forms of restraint –  lassoed, tied up by a ‘living rope’ of eels, hogtied inside a large tyre, netted, spread-eagled between wild horses, flash-frozen, ensnared in what appears to be an electrified chastity belt… not to mentioned at least twice being drugged into unconsciousness so he can be ‘examined’ by excited ‘scientists’. As Rupert Giles famously observed: “Sometimes the subtext becomes the text.”

You may accuse me of having a nasty mind – guilty as charged – but it’s something that’s come up in other people’s reviews of the strip. One can’t help but wonder if there was some alternative demographic diligently ticking those ‘My Favourite Story’ coupons every week to help keep Fishboy afloat for so many years!

Nevertheless, the strip had considerable merits in its own right. Fast-paced adventure, a fearless if naïve hero, a dazzling variety of locations, and sumptuous art all combined to give the strip a longevity unmatched in Buster until the crown was snatched by the late-coming ‘Leopard from Lime Street’.

But the end eventually came for Fishboy. On the trail of another sighting of his elusive parents – a trope played many times in the series before, only to turn out to be mistaken identity, a deliberate mislead, or a contrived failure to cross paths – our hero was finally reunited with his parents in Buster dated 6th December 1975.

That semed to sink Fishboy without trace. But others remembered the series, and after decades, he was acknowledged in two other series.

In 1989 and 1990, Phase III of Grant Morrison and Steve Yeowell’s ‘Zenith’ from 2000 AD, featured Fishboy and myriad other characters from British comics (either the real deal or slightly altered archetypes depending on copyright) battling an invasion by pan-dimensional beings. It didn’t go well for the cannon fodder, and while Fishboy’s fate wasn’t shown on-panel, we’re left to infer that he got a tube train dropped on him.

Still, at least that version looked human, seaweed speedo and all, whereas the one-panel cameo by Fishboy in 2005’s Albion by Leah Moore and John Reppion showed him as a mutated specimen in a jar, with more exaggerated fishlike features and a grotesque non-human appearance.

After more than a thousand pages – counting a handful of extra stories drawn for Annuals and Specials – of amphibious action, adventure and ambivalent sexuality, Fishboy must surely be due for a reprint revival by the Rebellion Publishing folks? Sarcastic remarks aside – and the series does rather invite them – the quality of the work is too good to be left to languish in a backwater.