This week we pay tribute to a fictional heroic Doctor, while the real doctors are the real heroes in these strange times.

At the time that Stan Lee and Jack Kirby were populating the pre-hero Marvel Universe with Big Panty Monsters (some of whom – Fin Fang Foom and Groot, to name but two – went on to bigger things than just menacing the world), Stan was creating little magical, fantastical short stories with Steve Ditko, whose sometime whimsical style was ably suited to the genre (see Amazing Fantasy, for example).  Small wonder then, that when it came to creating a magical super-hero to join the burgeoning Marvel panoply, Sturdy Steve Ditko was the artist/co-creator. Actually, the story goes that Ditko had the concept for the character and got Lee to provide the scripts.

Now, Dr. Strange is a major Marvel character; he’s been around for decades and had a film not too long ago, so I’m guessing you all know his story. Egotistical surgeon; car crash; damaged hands; Tibetan monastery; student of the Ancient One; Master of the Mystic Arts…

Dr Strange first appeared in Strange Tales #110 (July 1963), in a five page back-up where he was already established as a practitioner of ‘black magic’. In this first adventure he encounters Nightmare, his ‘ancient foe’ and calls upon the Ancient One for help; Strange’s man servant Wong also appears in this issue but is not named until #119. Thus we can assume that Strange has already been around for a while. In the second equally short story in #111, we encounter Baron Mordo, Strange’s arch-nemesis and the Ancient One’s other student turned bad. After a two issue gap, a further clash with Mordo occurs in #114, wherein we also meet potential novice Victoria Bentley for the first time. It’s not until #115 that we learn the origin of Dr Strange, as his series gets promoted to eight pages.

From there on, Dr. Strange appeared in every issue of Strange Tales, initially backing-up the Human Torch/Torch and Thing stories until #134 and then sharing the comic with Nick Fury, Agent of SHIELD until the final issue #168. To begin with, there were lovely little self-contained stories: a re-match with Nightmare, adventures in other dimensions, a haunted house, a wax museum, an encounter with Loki (perhaps easy to see why Ditko wasn’t drawing Thor!), a story with Cleopatra as the mysterious ‘Lady From Nowhere’, and numerous clashes with Baron Mordo. It wasn’t until #117 that Strange was even mentioned on the cover of Strange Tales, and he rarely had more than a small cover space devoted to his strip until, ironically, #146 and Ditko’s last Dr. Strange story. 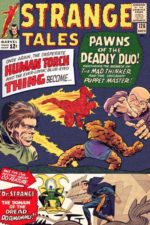 Gradually, we readers realised, with the introduction of the supremely powerful Dormammu and Clea, Strange’s partner-to-be in #126 that we had embarked upon a Grand Adventure that would last nearly two years. Dormammu and his dark dimension had been mentioned prior to his appearance, as one of the many mystic-sounding words that Dr. Strange used in his vocabulary (cf. the ‘Hoary Hosts of Hoggoth’, the’ Sons Of Satannish’ etc), but, as Lee put it, the readers were intrigued and he had to make up a character to go with the name. The flame-headed demon-like lord of an alien dimension thus made his debut, with a plan to invade and conquer our dimension (hey, no different to any other super-villain then?). There were a couple of diversions before the epic storyline of Dr Strange vs Dormammu began in earnest in Strange Tales #130 and lasted until Ditko’s last story in #146. Using Mordo as his pawn, Domammu plotted to defeat Dr. 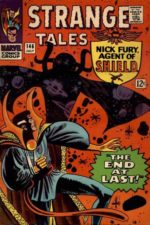 Strange, the only obstacle to his plans. Strange is both hunter and hunted as Dormammu, through Mordo, chases him across the Earth and mystical dimensions, while Strange seeks the secret of the mysterious Eternity to learn how to defeat Dormammu. While in the Dark Dimension, a helpless Clea watches on. Eventually, it all boils down to single combat in the Dark Dimension; Strange wins, having previously been given advice by the enigmatic, god-like Eternity (a character of striking visual appearance, a silhouette with the cosmos inside him – see the cover of Strange tales #146), only for Dormammu to go back on his word to forsake his conquest of our dimension; Strange continues to be menaced by Dormammu’s pawns, and Clea is banished for helping him. Finally, in Strange Tales #146, Dorammmu takes on Eternity himself in a bid for power, but is defeated and banished, releasing Clea, and the epic, and Steve Ditko’s run on the character he created both come to an end. 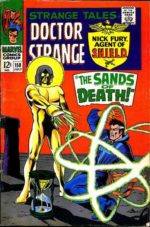 By this time, Stan Lee had turned over the scripting to Denny O’Neill, though it is believed a lot of the plotting was down to Ditko. After Ditko, the strip fell into the more than capable hands of Bill Everett, Marie Severin and Dan Adkins, passing to Roy Thomas & Gene Colan when Strange Tales was re-branded as Dr. Strange for issues #169-183, being the first time the character had his own title. Many memorable characters were introduced in that period – Umar (sister of Dormammu), Zom, Nebulos (Lord of the Planets Perilous) and, in particular, the Living Tribunal, a multi-faced giant with no neck and a floating head, who oversees the balance of all things in the Marvel Universe and is, allegedly, the supreme power in it (I expect there’s one or two others who might dispute that claim). The Living Tribunal has, of course, gone on to become a major player in Marvel’s cosmic mythos. This period also saw the return of Victoria Bentley. 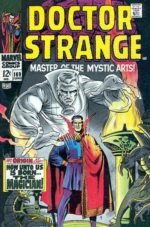 Dr. Strange was revived again in the 1970s and many times since, nearly always blessed with fine artists at the helm. Perhaps he’s a character, and his world a concept, that brings out the best. Undoubtedly, it’s the legacy of Ditko, whose surrealistic imagery defined the series, giving it a hallucinogenic, psychedelic quality by virtue of its bizarre landscapes and twisting dimensions. Add to that Lee’s cod Eastern mysticism and you have a strip that truly tapped into, if not pre-dated, the zeitgeist of the time, the counter culture of the beat generation and the psychedelia of the hippie movement. Unsurprisingly, Dr. Strange was a highly popular character in colleges across the USA and UK. I doubt that Lee and Ditko were on anything when they wrote and drew the series, but it sure read that way.

Quite literally, worlds away from Stan’s and Steve’s other creation (but see the superb team-up in Amazing Spider-Man Annual #2). By the Ragged Rings of Raggadorr, may the book of the Vishanti always be open for your all-seeing Eye of Agamotto!