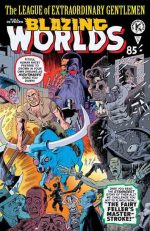 As the official agents for Alan Class sales from his archives, including certificated comics and printing plate sets, we were tickled pink to see the cover on this week’s League of Extraordinary Gentlemen: The Tempest #5 (By Alan Moore and Kevin O’Neill) with its homage to Alan Class comics. The ‘Blazing Worlds’ logo, and cover numbering, pricing and dress are all evocative of Alan Class’s presentation of his comics from the 1959 to 1989, and shows in their sixtieth anniversary year how much his publications are fondly remembered for the part they played in the history of British comics. We have a large stock of the real thing of course in our catalogue in the Alan Class Reprints category.