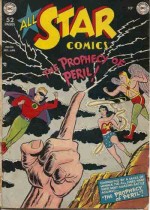 In our What’s Old feature this week, where we spotlight items from previously-listed stock, we showcase the December 1949 #50 issue of All-Star Comics in which the original super-team, the Justice Society of America, battle “The Prophecy of Peril!”. The Justice Society finds they must capture Mr. Alpha, a new villain with a connection to Jay Garrick, the Flash, who uses his scientific knowledge to commit seemingly foolproof crimes. The definitive JSA lineup – Flash, Green Lantern, Hawkman, Wonder Woman, Atom, Dr. Mid-Nite and the Black Canary – pools all its resources to thwart the master villain, in a tightly-plotted adventure courtesy of writer John Broome and the art team of Arthur Peddy and Bernard Sachs. This is GD+, an attractive copy with above-average interior page quality. The cover has been glued at the spine, and the back cover has suffered a long tear which has been carefully taped, but neither of those drawbacks impinges on the cover scene, and the interior pages, as noted, are above average quality for the vintage. On sale at £140.