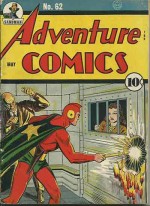 For this week’s visit to our previously listed stock, we focus, quite literally, on one of DC’s super stars of the 1940s.  Ted Knight, the Golden Age Starman, in addition to being a key member of the Justice Society of America and the founder of an heroic dynasty that stretches into today’s DC Universe, was one of the more meticulously-crafted strips offered by 1940s DC. A crusading astronomer who harnessed the energy of the stars with his gravity rod – akin to Green Lantern’s Power Ring – was created by Gardner Fox and illustrated by Jack Burnley, a mature artist who had developed a polished style, giving the series a sophistication which made it stand out from the crowd. Delightful and imaginative, the Starman stories are highly regarded by connoisseurs of the Golden Age, and the combination of quality and rarity makes them extremely collectible today. In addition to Starman, of course, Adventure featured several other popular series, including Sandman, the Shining Knight (whose first appearance was in one of our issues spotlit today), Hourman, and the underestimated Genius Jones. We present seven issues of Adventure for your consideration, from 1941 to 1944. All but one have Burnley Starman covers (and the last one’s a Simon & Kirby Sandman cover, so nothing to look down on!). Issue #62 VG £310, #64 GD/VG £235, #66 GD/VG £285, #67 GD+ £210, #68 FA+ £100, #70 GD+ £210 and #93 VG+ £180.