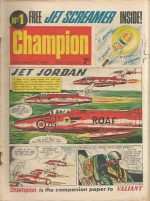 Our spotlight on previously-listed stock this week falls on one of the less well kn own British comics from the 1960s, when IPC/Fleetway launched not one, but two weekly adventure comics that were heavily promoted as ‘Companion papers to Valiant’, neither of which, peculiarly, ended up merging with Valiant; one such was Hurricane, which merged with Tiger and the other was Champion. 1966’s Champion #1 looked a bit odd to contemporary audiences, because more than half its content (though the readers had no way of knowing it at the time) was reprinted from European sources. Among the new material, though, was some imaginative stuff, including ‘Return of the Stormtroopers’, ‘School for Spacemen’, and a bona-fide superhero, ‘The Phantom Viking’. Readers didn’t take to the imports, though and after only fifteen issues, the title folded into Lion, with ‘Phantom Viking’, ‘Stormtroopers’ and a couple of humour strips making the leap across. This debut issue of a now-collectible short run is a lowish grade FA/GD at £25, with a small cover tear and spine wear. SORRY, THIS HAS NOW SOLD