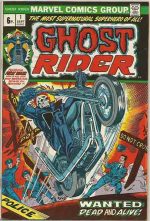 This week’s spotlight on our previously listed stock falls on Ghost Rider #1 VF+ £125 (pence copy). The 1970’s retooling of the venerable Western character, Ghost Rider, as a supernatural satanically-empowered cyclist raised eyebrows among the purists, to say the least – but no-one can deny it was a commercial success, and after a hit streak in Marvel Spotlight, former stunt-rider Johnny Blaze burned rubber into his own series!