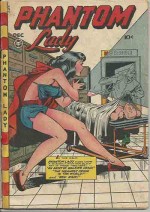 In our What’s Old feature, we highlight comics from our existing stock that you may have missed. This week: Phantom Lady #15 by Matt Baker. Victor Fox’s line of comics in the 1940’s was notorious for being shoddy, exploitative, and done on the cheap. But on the principle that even a stopped clock is sometimes right, Fox produced, almost certainly unwittingly, a handful of outstanding items, and Phantom Lady #15 is one of them. Sandra Knight was one of those socially-conscious debutantes who decided to fight crime by removing most of her clothing and – presumably – relying on the fact that the bad guys’ gaze wouldn’t get as far as her face. So far, so cheesy. But the primary illustrator was Matt Baker, known now as the definitive ‘Good Girl Artist’, who portrayed our implausibly-behootered heroine as an epitome of grace and charm. One of only a handful of African-Americans working in the comics mainstream in the 1940’s – and because of that, not hired by the major companies – Baker’s attention to details of body language, facial expression, and his keen eye for fashions made what could have been exploitative piffle into breezy, adventurous, classic sequential artwork. This copy of #15 features three Baker-illustrated tales, including one in which our heroine, ever ahead of the curve, faces a plague of zombies. It’s sound, attractive, with only very minor wear at the back cover’s lower edge and a couple of small sealed cover tears to the right cover edge, but a beautiful, unimpaired cover image. In VG+, it’s on sale for £450.