↓
Home→What's New→What’s Old: X-Men #4, with the debuts of Quicksilver & the Scarlet Witch 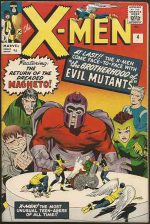 Our previously listed spotlight this week falls on X-Men #4, in which Wanda, everybody’s favourite Scarlet Witch, appeared for the first time as a member of the Brotherhood of Evil Mutants! The crimson-clad conjuress (though erroneously depicted as a Emerald Empress on this very cover) has been a mutant and a mage, an X-Man and an Avenger, a hero and a villain, and a bunch of other stuff besides, including being the alleged offspring of a bewildering variety of people as new writers take over. But however many retcons she endures, she remains one of Marvel’s most popular leading ladies. This issue, of course, saw the premier appearances of a few other folks as well: the super-swift Quicksilver, for many years Wanda’s brother but now maybe not (long story, Google if you’re bothered), Mastermind, the Toad, and indeed the Brotherhood of Evil Mutants itself! It’s an extremely attractive FN+ p copy with vibrant, deep, unfaded cover colour, and only very fine stress lines at the spine. On sale for £500.