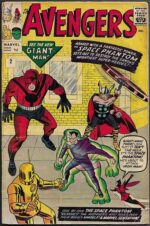 *Marvel: Stan Lee created the Fantastic Four as a response to DC’s success with the Justice League of America, but it was the later Avengers concept that more properly copies the JLA format, with all Marvel’s nascent super-heroes banding together to fight common threats. The nature of the Avengers ever-changing roster was there almost from the start, since the Hulk left the team in this second issue, which also featured the menace of the Space Phantom in his debut appearance, and reflected the recent change of Ant-Man into Giant-Man. We have a nice mid-grade pence copy available, with strong colour, nice pages and tight, firmly-attached staples. There is minor edge and handling wear, and a small 1 cm tear at the right cover edge. Very small creases break colour at the edge of the bottom right cover. There is also a fairly faint UK book shop stamp below the upper cover blurb (above Thor’s head); fortunately, this is not too prominent and does not cover any of the characters. Some corner blunting but nothing too bad.
PICTURED: AVENGERS #2 VG+ p £375 SOLD