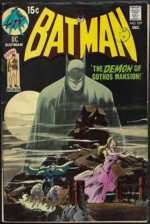 *DC: In the late 1960s and early 1970s, there arose a craze for ‘Gothic Romances’, the covers of which depicted diaphanously-clad lovelies fleeing a darkened mansion/castle/palace at night, frequently pursued by beasts. Writer Denny O’Neil, clearly having had Enough Of This Sort Of Thing, parodied the genre in Batman #227’s ‘Demon of Gothos Mansion!’, casting Alfred’s niece Daphne as the ingenue and arranging a beautiful Neal Adams cover, which became one of the most sought-after iconic covers of the Silver Age – not least because it also ‘homaged’ a Golden Age cover, Detective #31. This copy is VG pence, with minor faint creasing at corner and spine making it sound less appealing than it is ‘in the flesh’, as the stunning cover image is absolutely untouched by the minimal wear at the cover’s edges.
PICTURED: BATMAN #227 VG+ p £120 SOLD