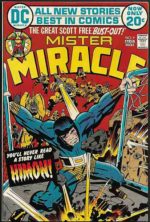 *DC: Of Kirby’s ‘Fourth World’ series at DC, Mister Miracle was the best received by the readership due to its relatable protagonist, who, despite his extraterrestrial origins, was an amiable if highly-skilled Everyman. But the pace really picked up with issue #4, when we were introduced to Scott’s old flame, Big Barda, former leader of the Female Furies of Apokalips. The tough, no-nonsense Barda contrasted with Scott’s laid back persona, and the dynamic brought the couple lasting popularity, the occasional ‘dramatic’ attempt to separate them being met with universal disdain. Another hit issue of the series was #9, in which the full background of Scott Free’s upbringing on the hell-world Apokalips, and his full origin, was revealed for the first time in detail. We have both these major issues back in stock this week, both cents copies with no UK pricing: #4 is FN+, with only very faint creasing at the lower cover corners impinging upon an otherwise virtually flawless copy. #9 is Near Mint, a grade we very seldom award to items of this vintage, a breath-taking copy with bright colours, firm staples, glossy cover, sharp corners, flexible interiors and not the remotest vestige of creasing.
PICTURED: MISTER MIRACLE
#4 FN+ £100
#9 NM £75