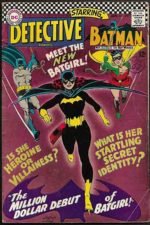 *DC: After the original Bat-Girl was swept away out of continuity with her aunt Batwoman following a change of direction for Batman in the 1960s, a new Batgirl was introduced, co-created by DC and the producers of the hit Batman TV show, as a boost to the third series of that iconic series. Barbara Gordon proved a hit as Batgirl both in comics and TV. Her comic debut came in Detective Comics #359, (1967) where she tangled with Killer Moth, just as she did in the pilot for her debut on TV. Barbara Gordon, amidst a history of adventure and misfortune, has gone on to become a mainstay of the DCU to this day. We present a VG/FN pence stamped copy of her debut, with some spine wear and corner blunting, plus a small diagonal crease across the bottom right of the cover, but with a rich, glossy unspoilt cover, excellent staples and page quality.
PICTURED: DETECTIVE COMICS #359 VG/FN p £385