*Marvel: In just Thor’s third appearance, Stan Lee & Jack Kirby began to lay the groundwork for the rich story-telling based on Norse mythology which was to follow. This landmark issue, Journey Into Mystery #85, has a cover featuring the debut of Loki, Thor’s half-brother, arch-nemesis and god of mischief, but also introduces Heimdall, the Rainbow Bridge he guards, Asgard itself and (in a cameo appearance) Odin, Thor’s and Loki’s father. Loki of course has gone on to great fame, both in Marvel’s Cinematic Universe and in many of his own series, as much an anti-hero as a villain. This pence printed copy of JIM #85 is in significantly high grade, FN/VF only because of minor edge wear. The cover colours are rich and glossy, the cover image totally unmarred, the comic is tight and flat with excellent staples and page quality. There is a tiny 4 cm tear at the bottom rear cover with a small mark, but this barely troubles a comic of beautiful, outstanding quality. High resolution images are available on request.
PICTURED: JOURNEY INTO MYSTERY #85 FN/VF p £1,900 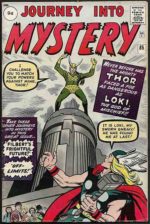 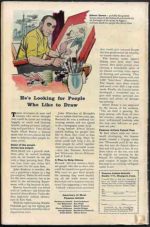