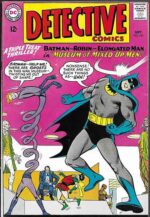 *DC: Our stock updates to Detective Comics continue, this time focusing on the ‘New Look’ for Batman which commenced with issue #327 in 1964. Editor Julius Schwartz took over the title, bringing with him the creators he had worked with elsewhere in the DCU. Gone were the aliens, monsters and most of the Batman ‘family’, replaced with more ‘down to Earth’ storylines with gangsters and super-villains. There was an emphasis on mystery: gone too was the Martian Manhunter (to House Of Mystery), replaced in the back-up feature slot by the Elongated Man. Personally, although I enjoyed Carmine Infantino’s art on the Batman strip (where he did many of the stories), and his covers were often spectacular, it was the Elongated Man stories that were the highlight for me. Infantino again, usually self-inking, which lent the series a nuance unseen in his work elsewhere; the Elongated Man stories were perfect little vignettes of mystery and ingenuity penned by the masterful Gardner Fox. And the banter between Ralph and Sue was spot-on and a vital element to the strip’s success. Most collectors I expect buy these issues for the Batman stories — I have them in my personal collection for the Elongated Man. Ralph lasted until #383, after which he was replaced in the back-up slot by Batgirl, but that’s a story for another update; here we are concerned with the Elongated Man years. In #331, Bats & EM joined forces in a ‘triple treat thriller’.
PICTURED: DETECTIVE COMICS #331 FN+ £21.25 SOLD