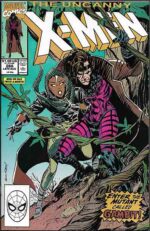 *Marvel: While this issue is a frequent visitor to our shelves, it never languishes for long. In August 1990’s X-Men #266, while temporarily de-aged to childhood (don’t you hate it when that happens?), Storm met a charismatic thief named Gambit, who aided her in escaping from the Shadow King. Unlike many one-off guest-stars, however, Gambit caught on with the reading public, and stuck around to become a mainstay of the team – fortunately ditching his original costume of pervy knickers, stripy tights and flasher-mac in favour of a more conservative ensemble! Despite persistent rumours of a Gambit solo film having finally, it seems, fizzled, he remains a hugely popular figure in the lucrative X-Men franchise, and his full debut is always a hot choice with buyers. We’ve had many copies of this debut through our hands, but never one as nice as this; virtually as good as new, with just the merest suggestion of stress marks at the spine and the tiniest ‘blunting mark’ at the spine bottom. We’re very picky about using grades above NM, but this one came close.
PICTURED: X-MEN #266 NM £160 SOLD