*Marvel: We do love those Big Panty Monsters here at 30th C., and we’re not alone, as our valued customers eagerly snap up these (mostly) Lee & Kirby tales of giant monsters bestriding a (nearly) defeated Earth, sensibly attired in sturdy M&S knickers from the ‘Ample Matron’ range. We’re chuffed to welcome several new entries in this sub-genre into stock. Journey Into Mystery #58 brings us ‘Rro!’, a superb VG, vivid red cover, only a bit of ‘flakiness’ around lower right corner belying a higher grade. We have not one, but two copies of Tales of Suspense #25, with ‘The Death of Monstrollo’, one in VG- (moderate spine and slight lower right cover creasing), and one in GD+, with a bit more creasing (including a light vertical crease bisecting Monstrollo’s head – as if he didn’t have enough problems!), but both clean and sound copies. Tales of Suspense #35 brings us the ‘Challenge of Zarkorr’, a spiffy VG+ with light lower cover wear, featuring an alleged Watcher prototype, while #38 steps away from the BPM tropes to give us the Genie-empowered ‘Teenager Who Ruled the World!’. Last but far from least, Tales to Astonish #16 brings us ‘Thorr!’ a menace who is not only one letter away from Marvel’s later God of Thunder, but is actually the model for his first opponents, the Stone Men. This, again, is a lovely VG with lustrous cover colour and only very faint discolouration at staple area. In addition to the cover-featured BPMs, of course, most of these lovelies also feature a Lee & Ditko twist-ending thriller, and other mystery tales from Don Heck, Gene Colan and other classic Bullpen artists.
PICTURED:
JOURNEY INTO MYSTERY #58 VG P £75
TALES OF SUSPENSE
#25 VG- p £65
#35 VG+ p £50
TALES TO ASTONISH #16 VG p £90 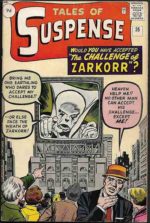 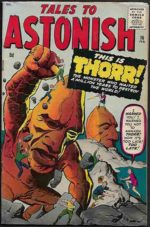