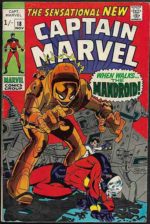 *Marvel: Well, here’s a peculiarity; in Captain Marvel’s first solo series, Carol Danvers, despite being a top-notch security chief (the captions told us) played the damsel-in-distress role uncomfortably often, and this issue, a confrontation between Mar-Vell and his nemesis Yon-Rogg – was no exception. However, in Carol’s later solo series as Ms. Marvel, the events of this issue were retconned as the ‘trigger’ for Carol’s gaining her own super-powers – nothing of which is actually mentioned in here! That retcon, coupled of course with Carol’s own increased visibility since she stepped up as Captain Marvel on page and screen, has given this well-executed but unexceptional issue a surprising value lift. This is a bright and shiny FN/VF copy of this ‘stealth origin’.
PICTURED: CAPTAIN MARVEL #18 FN/VF  p £55