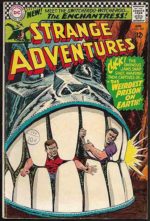 *DC: “The Enchantress? Isn’t she a Marvel character?” we hear you say. Well, yes & no. Amora, the Enchantress who is Thor’s most beloved enemy, is certainly the most famous bearer of that name, but DC hit back with a short-lived super-heroine in 1966, who went on to better things after fifteen years in Limbo. In Strange Adventures #187, we met June Moone, freelance artist who stumbles into the wrong corridor at a costume party being held in a castle, and gets changed into a mystically-empowered heroine charged to fight crime. Making only two further appearances in SA #191 and #200, DC’s Enchantress was forgotten until she was revived as a villain in Superman Family #204, the years of exposure to dark magic having corrupted her. Following several other guest appearances, she became a regular in the first series of Suicide Squad, transitioning to the Big SCreen as the Big Bad in the Suicide Squad movie of 2016. It was a long strange journey to stardom for Ms. Moone, but it all started here, in this very respectable VG+ copy, light to moderate spine and edge creasing, unfaded cover image, excellent page quality.
PICTURED: STRANGE ADVENTURES #187 VG+ p £50 SOLD