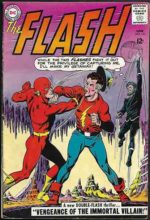 *DC: The only example of a duplication in the Square Mile Collection as we release the second Square Mile copy of this famous issue. Flash #137 was a landmark issue in Gardner Fox’s reintroduction of Golden Age characters into the Silver Age DC Universe. Not only did it feature the third appearance of Earth Two (the parallel world that Barry Allen read about in comic books when he was a kid!), and Jay Garrick, the Golden Age Flash, it was also the first Silver Age appearance of the villainous Vandal Savage and the first in-continuity appearance of other members of the erstwhile Justice Society (following a flashback sequence in Flash #129) who decide to ‘get the band back together’ in this very issue! This copy is an attractive FN with just the most minor wear at spine, great cover colour, firm staples at cover and centrefold.
PICTURED: FLASH #137 FN p £100

More from the Square Mile Collection next week!