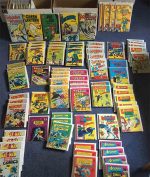 *DC: Riddle me this: when did the X-Men, Sub-Mariner, Spider-Man, the Avengers, and the Fantastic Four co-star in Action Comics? When it was Action Double Double Comics, of course! In the Sixties, it was a common practise of the UK distributors Thorpe & Porter to return the covers of unsold copies for credit, then re-purpose the ‘destroyed’ coverless copies, four to an issue, under a new cover – usually an ineptly-recoloured stat of a US original.

These Double Double Comics are literally random – any given issue of, for example, Superman Double Double Comics might have copies of Superman, but is just as likely to have any other DC title of the period, from super-hero to comedy to romance to war, or even the occasional Marvel and ACG comic that slipped into the pile, depending on what was in T & P’s piles of unsolds in the warehouse! The only consistent rule we’ve established – so far – is that even though the same distributor handled Charlton and the Archie super-heroes, we’ve never found any of them in a Double Double Comic. At least not yet. Even copies of the same issue, according to the cover, usually have significantly, sometimes entirely, different contents, as will be evidenced in our detailed listings! Thorpe & Porter also produced similar Annuals in hardcover, for the lucrative holiday market. These gather up six unsold copies, rather than four, and, doubtless in an attempt to look more ‘festive’ the rebound unsolds are allowed to retain their original covers. Three of these Annuals – Aquaman, Green Lantern and Wonder Woman – are also new in, and like their ‘floppy’ brethren, the ostensible stars often bear only a passing resemblance to their actual contents.

It was known at one time, when Double Doubles were to be had cheaply, for less scrupulous dealers to ‘strip them for parts’ -use pieces, most usually the centrefolds, on incomplete copies with covers to ‘Frankenstein’ together an apparently complete copy. This resulted in a scarcity today, of unmutilated Double Doubles, which is why we’re particularly delighted to have so many in at once – previously, we’ve only ever seen them in quantities from pairs up to half a dozen, but this collection of almost 60, wide-ranging in grade, also gives an insight into the bewildering variety of content. Completists should tread carefully, as virtually every single copy is a variant issue, once you get behind the cover – you’ll never “get them all” – until you get them ALL!!

In addition to the ‘team photo’ of the collection en masse, we illustrate here four of the many highlights: Batman Double Double #2 VG £60, with, among others, Batman #181 with the Poison Ivy origin – centrefold removed by a previous owner, but the Ivy debut is complete!; Lois Lane DD NN (#1) FN+ £40, with Lois #70, the Silver Age return of the Catwoman; Strange Adventures DD #1, with Hulk #102, first Silver Age issue of the Jade Giant and Aquaman Annual VG £40. Thorough details on content, grade and price of everything else may be found under the ‘Double Double Comics’ header in the DC category of our catalogue.