↓
Home→What's New→RIP Harlan Ellison: The Writer On The Edge Of Forever 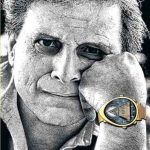 We are saddened to learn of the death of Harlan Ellison at 84, who was a hugely influential figure in Science Fiction and literature in general, and television. He was an award-winning short story writer, with Hugo and Nebula awards for ‘Repent Harlequin, Said The Tick Tock Man’, ‘I Have No Mouth And I Must Scream’ and ‘The Beast That Shouted Love At The Heart Of The World’. As an editor, he compiled the famous ‘Dangerous Visions’ and ‘Again, Dangerous Visions’, seminal anthologies presenting the new wave of American science-fiction writers in the 1960s, of whom he was at the forefront. He wrote essays and columns and his screen-writing credits are too numerous to mention, but include episodes of Voyage To The Bottom Of The Sea, Outer Limits, The Man From UNCLE and, most famously, the classic Star Trek episode ‘The City On The Edge Of Forever’, which itself won a Hugo award. He also more than dabbled in comics, his most famous comic work being the two-parter for Marvel in Hulk #140 and Avengers #88.

Ellison was a somewhat controversial figure and known for often falling out with people and organizations. J G Ballard described him as ‘an aggressive and restless extrovert who conducts life at a shout and his fiction at a scream’. Robert Bloch said of him: ‘The only living organism I know whose natural habitat is hot water’. But there is no doubting his status as a significant contributor to the culture of the second half of the 20th Century.