*DC: The tabloid-sized Limited Collectors’ Editions of the 1970s proved popular enough with the readership that DC soon began a spin-off series, Famous First Editions, initially in the LCE numbering, then in its own numbering. These were cover-to-cover reproductions, exact in every detail, of major Golden Age comics, distinguished from the originals only by their much larger size and an exterior card cover – which, once removed, caused a handful of unscrupulous dealers to try their luck by attempting to palm these off as the originals! (“Oh, comics were bigger in the 1940s”). DC swiftly changed the format to prevent such shenanigans, but these reproductions remain highly sought-after. We have four new in: C-26, reprinting Action Comics #1, the first appearance of Superman; F-4, with the premier of the original Captain Marvel (now ‘Shazam!’); F-6, reproducing the first issue of Wonder Woman’s solo series and F-7, with the debut of the Justice Society of America from All-Star Comics #3.
PICTURED: FAMOUS FIRST EDITION
C26 VG+ £25
F4 FN £20
F6 FN+ £25
F7 FN+ £25 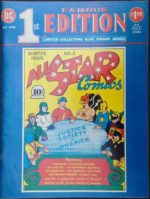