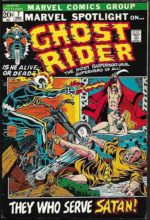 *Marvel: Following his debut in Marvel Spotlight #5, Johnny Blaze, a.k.a. the Satanic stunt-biker Ghost Rider, gathered momentum – as one would expect – and tore through a series of supernatural adventures until issue #11, after which he ceded the Marvel Spotlight gig to Son of Satan, and Johnny B. span out into his own successful 80+ issue series. We have the Ghost Rider run of Marvel Spotlight, courtesy of his creator ‘Groovy’ Gary Friedrich and artist Mike Ploog, from #6, the character’s second ever appearance, to #11, in superior condition, all cents copies.
PICTURED: MARVEL SPOTLIGHT
#6 VF/NM £76 SOLD
#7 VF+ £58