*Marvel: From the earliest days of the ‘proper’ X-Men, as we know them here at 30th C. (none of your Storm and Wolverine gubbins ‘ere), these are the founders and originals! Sixteen new issues in, commencing with the second issue (1st Vanisher), which is an attractive Fine, and would grade higher but for the suspicion of very slight right edge trim. Other highlights of this selection include the Sub-Mariner/Evil Mutants team-up in #6, the first Juggernaut in #12, the deadly debut of the Sentinels in #14, the first Mimic in #19, and the loveable Locust in #24 – well, they can’t all be winners! With a couple of exceptions, this new range is averaging Fine or better, with attractive covers with unbroken cover and gloss, eminently collectable. Highlights shown below: 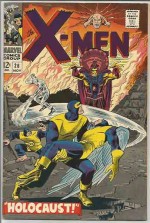