*Marvel: This week the most sought-after comic of the 1970s. Hulk #181 features the first full appearance of Wolverine, the Canadian super-hero who, outstripping everyone’s expectations, became the most popular Marvel character created since the dawn of the Marvel Age. Created by Len Wein and Herb Trimpe (from a John Romita design), Wolvy was revived by Wein when he put together the ‘New’ X-Men who debuted in Giant-Size X-Men #1, and since then, Wolverine has become the star of the lucrative X-Men franchise, and a multi-media darling in his own right. This issue, where it all really kicked off following a one-panel cameo in the preceding ish, is a nice mid-grade copy with brilliant cover colour and gloss, firm, tight staples and white to off-white pages. There are minor spine ticks and corner blunting, and relatively minor wear along the right edge which occasionally breaks colour. There is a very small horizontal 1 cm crease above the MCG banner. The front cover bears a slight trace of what might have been a subscripton crease down the centre, but this is quite faint and not at all pronounced (it’s a little more noticeable on the back cover); on the front it only breaks colour for about 0.5 cm above the MCG banner. Most crucially, the Marvel Value Stamp (probably the most important appearance of Shanna the She-Devil, bless her!) is still in place. This promotional coupon is the blight of Marvels from a certain period, often clipped and missing – but not in this instance! Between the frequently-missing Marvel Value Stamp, and the fact that this issue was never distributed in the UK, intact copies of Hulk #181 are keenly collected, and over the last year or so, prices have soared. Not the rarest Marvel key by any means, but the most in demand and fastest-selling. High resolution images are available on request.
PICTURED: HULK #181 VG+ £3,250 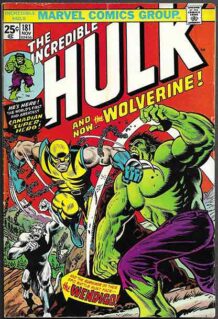