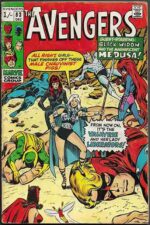 *Marvel: In August 1967’s Avengers #43, we found out that the Black Widow’s nom-du-guerre was a teeny bit inaccurate, as her previously ‘deceased’ husband was discovered, not only alive, but the first subject of the Soviet Union’s own super-soldier project, the Red Guardian! Now announced as one of the major figures of the BW film (though whether as antagonist or ally is not yet known), the Red Guardian’s debut is a low grade good pence printed copy with heavy spine roll and misaligned staples, but otherwise okay. Avengers #83 saw several of Marvel’s fabulous femmes – Black Widow, Medusa, the Scarlet Witch and the Wasp – join forces as the Lady Liberators, under the leadership of the vivacious Valkyrie! Val’s origins and history are too complex to go into here, but this was the first appearance of the Valkyrie character and persona, as later portrayed by Tessa Thompson in ‘Thor: Ragnarok’ and ‘Avengers: Endgame’. This is a respectable mid-grade pence printed copy with the only specific defect being a small tear on the back cover at the base of the spine.
PICTURED: AVENGERS
#43 GD p £25 SOLD
#83 VG+p £45