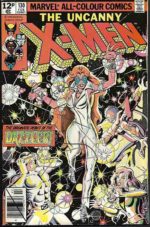 *Marvel: X-Men #129 introduced not one, but two, characters who were to become major players in the lives of the X-Men. Kitty Pryde, the young immaterial ingenue, made her debut as a pupil at Xavier’s school and went on to become a central part of the series, eventually becoming the leader of the team, while Emma Frost, White Queen of the Hellfire Club, dedicated her telepathic prowess to the X-Men’s destruction – though that dedication hasn’t prevented her from occasionally joining the group herself, and seducing Cyclops whenever Jean Grey happens to be dead for a while! In the next issue, #130, the world met the Dazzler, whose longevity as a comics heroine has been remarkable, considering her peculiar origins. Conceived as a disco tie-in by Casablanca Records in the late 1970s, Marvel was to create a singing super-heroine and Casablanca was to recruit a live singer to ‘be’ Dazzler. Originally intended to resemble Grace Jones, the design was considerably altered to look like then-hot actress Bo Derek. When the record company withdrew, Marvel were left with an ‘orphaned’ character, who they introduced as a fully-fledged mutant with the ability to transmute sound into light. Both these issues, with the debuts of three long-lasting major players, have been restocked with sharp, bright, tight VF+ copies.
PICTURED: X-MEN
#129 VF+ p £75
#130 VF+ p £50