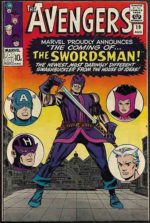 *Marvel: Joining the Avengers during the ‘Cap’s Kookie Quartet’ phase, the Swordsman was a swashbuckling crusader introduced to the team by departed Avenger Iron Man – or so our heroes thought! Actually, his whole backstory was a ruse, and the Swordsman was an agent of the Mandarin, sent to destroy the team from within. His deception exposed, the Swordsman spent the next several years as a member of various villainous teams, before redeeming himself, dying heroically, and marrying Mantis. (Yes, in that order. The Seventies were a strange time in comics.) Since then, of course, he’s returned from the dead, and developed an elaborate retcon involving his being either Hawkeye’s mentor or long-lost brother, depending on who’s in charge of continuity in any given week. Nevertheless, his current status as itinerant anti-hero seems to be as stable as anything in the current MU, and this copy of his debut is a lovely FN+, with bright lustrous cover colour.
PICTURED: AVENGERS #19 FN+ p £60