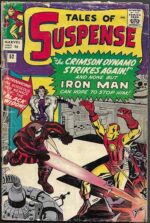 *Marvel: In 1964, the adventures of Iron Man were enlivened in Tales Of Suspense #52 by the appearance of the lovely but lethal Natasha Romanoff, code-named the Black Widow, one of the Kremlin’s deadliest operatives. Originally an appealing but unoriginal femme fatale in civvies, inspired by Caniff’s Dragon Lady and other Mata Hari wannabes, Natasha proved surprisingly adaptable, allying herself first with the second Crimson Dynamo (also premiering in this issue) and later Hawkeye, and trading her cocktail dress and veil for the first of many costumed ‘looks’ as she switchbacked from villainess to heroine, culminating, of course, in her live-action embodiment by Scarlett Johansson in the Avengers and other Marvel movies – and now starring in a big-screen feature of her very own! This issue is where ‘Tasha’s career kicked off, and is a lower grade pence printed copy with much wear and some colour-breaking creasing at the spine and edges, but with a mostly unspoilt central cover image. Three extra staples have been added (two near the originals), although it is unclear to what extent they are necessary. There is a very small chip out of the top edge and a tiny upper spine split. Page quality is quite decent.
PICTURED: TALES OF SUSPENSE #52 GD- p £300