*Marvel: Although Sue Storm Richards is unquestionably the First Lady of the Marvel Comics Universe, that title in the Marvel Cinematic Universe – Captain Marvel’s solo success notwithstanding – is held by the Black Widow, as played by Scarlett Johansson in, to date, seven major feature films (not counting quickie cameos). With her first solo feature film coming up next year, we’re pleased to present four issues spotlighting events or characters central to the Black Widow movie mythos. She’s been a hero and a villain, a spy, assassin, friend and lover, an Avenger and a Champion, and many more roles in the Marvel Universe, on screen and on the printed page. One of the most fascinating and enduring characters in the Marvel mythos, finally achieving mass recognition. A toast to you Ms. Romanoff – Nostrovia! 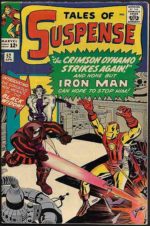 We’re starting, of course, with the Big One! Tales of Suspense #52, April 1964, saw the debut of Boris Turgenov, the second man in the Crimson Dynamo armour – and one of the longer-serving title-holders – but more importantly, it brought us the very first appearance of Madame Natasha, the Black Widow! At that time a Milton Caniffesque femme fatale, slinking around in cocktail dress and fur stole, Natasha was a very different creation from her later iterations, but this is where the Black Widow’s long career in comics and in other media got its start. This is a FN/VF cents copy; no pence stamp or overprint. There is no defacement of the cover scene. Interior pages are off-white and sharp, no fraying, creases, tears or other defects. There is minimal edge and spine wear, with a trace of raggedness at the top cover edge owing to the cover being a smidge taller than the body of the book – an original printing aspect, not a defect as such. The cover colour is deep and unfaded, excellent gloss, still a fresh looking copy despite its vintage. This premiere issue of a significant character in Marvel history is priced at £1,500. Front cover, back cover and splash page are shown here; high resolution images are available on request.