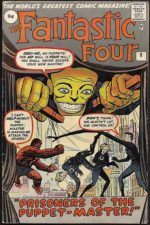 *Marvel: The early issues of the Fantastic Four were bursting with characters who would later play pivotal roles in the greatest Marvel Universe, and issue #8 was no exception. This issue saw the introduction of Phillip Masters, the Puppet Master, whose traumatic childhood caused him to seek power, wealth and companionship by controlling the minds of others via a certain radioactive clay isotope, which he fashioned into puppets of the real people to invoke a modern-day voodoo. Appearing multiple times in the Marvel Universe, he remains a bane of the FF to this day – though his one emotional weak spot is his genuine love for his step-daughter Alicia, perhaps born of guilt over Alicia’s blindness, which was caused by an explosion during a dispute between Masters and Alicia’s father, in which Alicia’s father was killed. Alicia herself, originally a pawn of her evil step-father, has assumed a larger role, becoming first the beloved of Ben Grimm, the Fantastic Four’s Thing, sightlessly sensing the noble soul beneath the monstrous facade, and also, pivotally, convincing the aloof Silver Surfer of the value of humanity in the epic ‘Galactus Trilogy’. This debut of two key characters is FN+, light corner and edge wear, but firm staples, bright pages, and only the most minimal corner ‘blunting’.
PICTURED: FANTASTIC FOUR #8 FN+ p £375 SOLD