*Marvel: One of the most sought-after Marvel Comics of the 1960s is Fantastic Four #48, which introduced the Silver Surfer, a cosmic-powered being the equal of the combined FF… and the Surfer’s master, Galactus, an entity of even more monstrous might! Both became major figures in the Marvel Universe, with the Surfer repenting his role as Galactus’ herald and choosing the side of justice, while Galactus’ insatiable hunger drives him ever onwards to more heinous acts. This Square Mile pence printed copy is very nice, typical of the collection, bright with vivid colour and decent gloss, white pages, tight and flat with firmly attached staples and a minimum of corner blunting. There are a couple of pen marks near the upper left corner: faded felt-tip over the character heads in the masthead, and a small ’20’ in pen in the top bar of the ‘F’ in ‘Fantastic’, but otherwise an unspoilt cover image, which very minor edge and spine wear do not detract from. There are small pressure and handling marks which barely show on the cover. Great visual appeal on this classic issue. High resolution images are available on request.
PICTURED: FANTASTIC FOUR #48 FN p £1,050 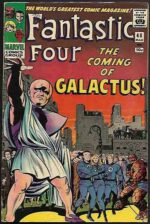